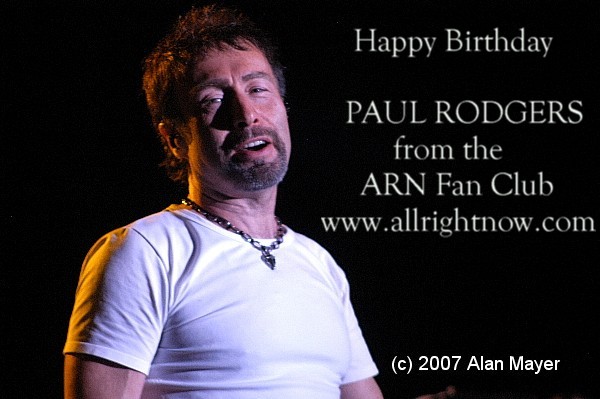 Paul Rodgers has released a new studio recording that is available exclusively on-line via CD Baby, and all other digital retailers.  The song "With Our Love" has been shared with fans and the public on his 62nd birthday, with one hundred percent of the proceeds earmarked for the charities The Racehorse Sanctuary & Rocking Horse Children's Charity and Seraphim 12 Foundation.  The composition was co-written and performed by Perry Margouleff, whose friendship with Rodgers dates back to over twenty years ago when they met in the U.K. while Margouleff was performing with The Pretty Things.  They have collaborated over the years.

All of these charities are organizations Rodgers has offered significant support to in the past, in fact he is a Patron of one while Perry Margouleff is a Senior Board Member of the other.  Rodgers shared, "Horses are such a powerful part of human development and have been since the early ages. We humans owe them so much.  My wife Cynthia and I have visited both sanctuaries and can't imagine any of these healthy vibrant beings being sent off to die.  Especially Seraphim 12's 'Daisy,' who was to be slaughtered for human consumption at four months of age! Or ex-racehorse 'Mr. Streaky,' who due to human error developed anxiety and fear issues which now after eight years he is finally starting to overcome, and in doing so is helping the autistic and inner city kids who visit the sanctuary. Blues great Willie Dixon believed that 'Once we know better we can do better'...so now that we know better, let's do better."

The song "With Our Love," can be found on-line here: http://cdbaby.com/cd/paulrodgers

For more information on these charities, Paul Rodgers and Photos, click these links:
www.racehorsesanctuary.org
www.seraphim12foundation.org
www.paulrodgers.com

Deborah Bonham admitted she really couldnt quite believe it when she introduced him. Even now, it doesnt quite ring true.

But yes, it really did happen. Paul Rodgers, the man who gave us Free and Bad Company, played Chichester on Saturday night. And - no surprise in this - he brought the house down.

With all the skills of his years in the business, Rodgers delivered a stunning set which underlined exactly why hes arguably the greatest rock and blues singer weve ever produced.

Others come close, but while others of his vintage have faded just a touch, Rodgers has continued to grow. And on Saturday night, he once again married consummate artistry with the joy of performance to produce a session which will be remembered for years to come.

Classics including Walk In My Shadow, Ride On A Pony, Fire And Water and My Brother Jake were among the delights in a Free-heavy set. Wishing Well was sublime, and All Right Now was one of those spine-tingling moments which suggest that no other live entertainment can ever truly come close music at its very best.

Just impressive was the fact that backing him was the Deborah Bonham Band whod earlier backed Deborah through her own superb set - just one of the many elements in a four-hour slice of musical heaven in aid of Deborahs beloved racehorse sanctuary (http://www.racehorsesanctuary.org/).

Opening the night was Chichester Music Academy youngsters Room 4 with an assured version of Teenage Kicks - a great performance given that none of them are teenagers yet.

Closing the night were terrific, contrasting sets from Paul Rodgerss daughter Jasmine and son Steve. In between times, auction and raffle contributed generously to the cause.

Everyone played their part, but all would concede that it was Rodgers who took it to the highest level. And what bliss it was to catch him up close and personal in a setting far more intimate than hed usually play.

Those of us privileged enough to have been at The Venue on Saturday will grow increasingly smug with passing time. We were there, and thats all that mattered. Its All Right Now and for a very long time to come.

Joe has requested two songs that Rodgers wrote and recorded with Free.

The shows will be recorded for a future DVD.

Paul Rodgers was sworn in as a Canadian Citizen, he now is a dual citizen of the UK and of course Canada.  In a ceremony held in British Columbia on Friday, October 21 he was asked to lead the group of 100 new Canadian Citizens in singing Canada's National Anthem O' Canada.

"It may not be my native land but Canada is surely now my home. While I'll always be an Englishman, Canada has given me so much for which I am grateful. My wife, your former Miss Canada Cynthia Kereluk, a new and extended family and the chance to be truly free in a country that with its quiet strength combines the best of so many worlds. I'm proud to be a Canuck."