Photos and Reviews are being added daily, if you have one to be posted

just send it to [email protected]

check back daily for more .... " Karen from California  meets Paul for the 1st Time " 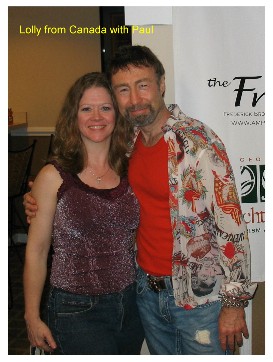 Counting the two Atlanta concerts on April 13 and 14 I have now been to thirteen Paul Rodgers concerts!  That should say it all right there!  I am now planning on my 14th Paul Rodgers concert this June 30th in Michigan and can hardly wait!  What is so special about a Paul Rodgers concert?  EVERYTHING!  I have been to see a lot of other artists but Paul is my favorite by far!  He has such a special way of connecting with his audience. He has the most amazing voice I have ever heard in my life!  Not only do the fans have a great time, dancing and singing along with Paul but you can tell Paul has a great time with the audience as well!  He truly enjoys what he does and puts his whole heart and soul into each show!
The Atlanta concerts were no exception.  Friday night was truly fantastic and meeting Paul after the concert was just the greatest!  He is so nice and so caring about his fans!   Saturday night was so exceptional!  The weather was a big question, with severe storms in the area, but luckily, it just ended up raining.  But of course, that didn't dampen anyone's spirits!  Paul was out in the audience singing from atop one of the tables and then even started up through the audience!  What a thrill!  The songs were great, the band was great and the experience of another Paul Rodgers concert was still a thrill just like the first time I ever saw him in concert!
I wanted to thank Lucy for the fan meet and greet before the show on Friday night.  It was really great meeting some of Paul's fans, to share memories of concerts past and looking forward to the new concerts to come.  And it was so awesome that each fan received the new CD, "Live from Glasgow" and Paul even autographed it after the show!
I also wanted to thank Cynthia. She is one of the nicest people I've ever met!  Paul is so lucky to have her!  She is so great with all the fans and makes us feel special, especially when she remembers us after meeting so many people!
And I wanted to especially thank Paul!  He has such an amazing voice, a true gift from God!  Thanks for sharing with us!  You are truly amazing!
See you in Michigan!
Sandy
Columbus, OH 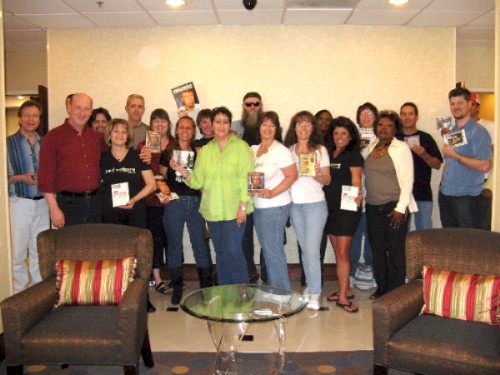 Thank you  Karen for sending in the Photo April 13 and 14, 2007: A dream weekend.  Starting with the arrival of my friend Vanessa in Charleston a few days earlier, the entire weekend could not have been better had I scripted it.  Thanks to our shared love of Paul - and Lucy - Nessa from the North, me from the South, we meet once a year to see Paul.
We had a grand drive to Atlanta from Charleston, catching up, and just laughing a lot.  At 4:00 on Friday, our Lucy hosted a fantastic gathering of fans at the hotel.  It was wonderful to see old friends, and we met so many new fans, all of them fun, friendly, and eager to see Paul.  Fans had gathered from Chicago, San Diego, LA, Ohio, Canada, Scotland, North Carolina, other parts of Georgia and of course, we two from Michigan and South Carolina.  Courtesy of PR, Lucy had a box full of treasurers given by random drawing. Just about every one got a great gift, from DVDs and CDs, magazines and pins, autographed items and even a denim PR jacket!  And of course, the new not-yet-released CD, Paul live in Glasgow, was available to us!  We met so many great new friends, and plan to keep in touch and meet up at other shows!
Then that night, the beautiful outdoor amphitheater was covered with happy fans in full PR regalia.  The lovely Cynthia was on hand with an even greater range of new merchandise, in colors and styles to suit everyone.  It was fantastic to see so much PR-wear moving off the shelves.
The concert? What is there to say?  The incomparable Paul Rodgers was just that.  As he always does, he oozed soul, with a hefty helping of zeal and fire. His voice and range get better and better every year. Paul treated the fans to an array of his Free, Bad Company, Firm and solo work, from the fun and bouncy Youngblood to a steaming rendition of Satisfaction Guaranteed.  The beloved All Right Now brought down the house, as it always does.
On Saturday, it rained buckets, but you know that didn't stop the fans!  They were out again with their PR shirts shielded by rain gear. A handful of us were tucked up under the little roof, and who should join us in dancing and woo-hooing than Paul's Cynthia, who is just a gracious lady, beautiful inside and out.  Her kindness to a young, wheelchair bound boy will stay in my memory.
The rain didn't dampen anyone's spirits, including Paul's.  He was in fine form again, even venturing up into the stands, to the joy of the fans.  Paul's piano accompaniment to Bad Company was spellbinding.   But when he brought out Hendrix's haunting Little Wing, I was reduced to tears, and not a few of them. It was too beautiful for words, and the hush that fell over the crowd said the fans felt it, too.
That night, we were treated to a backstage meet and greet with the whole band!  There were so many fans waiting, it must have been a two hour wait, and another chance to hang out with fans and exchange PR stories.  Nessa and I, along with Lucy and her sweetie Rob, were the last to go in.  It was a little overwhelming, being in such close quarters with that much talent.  Howard and Jeff, Lynn and Kurtis, and there at the end . . . the legend himself.  But they treated us like the stars, thanking us for our patience during the long wait - as if we minded!  All of the artists signed whatever we'd brought along, chatting like old friends. Then we had some photo ops, with the whole group, with silly Jeff behind me whispering, "Hey Luuuuucy, you got some 'splaining to do!"
The highlight for me was having Paul personalize a photo of he and I taken in Tacoma a few years ago, THEN having him do the same with my denim PR jacket! I'm a hearing-impaired person, and was so touched when Paul was very careful to look at me while talking so I could lip-read him.  He is truly a caring person, who shows his quality time after time, in his music and in the way he lives his life.
It was truly an honor to spend a few minutes backstage, and another beautiful memory for my collection.
Since Vanessa and I use Paul's concerts as an excuse to get together, we're eagerly awaiting next year's show!
Special thanks again to Lucy and Rob, with their big hearts of gold, who truly go out of their way to create special moments for the fans.
Tammy
Charleston, SC 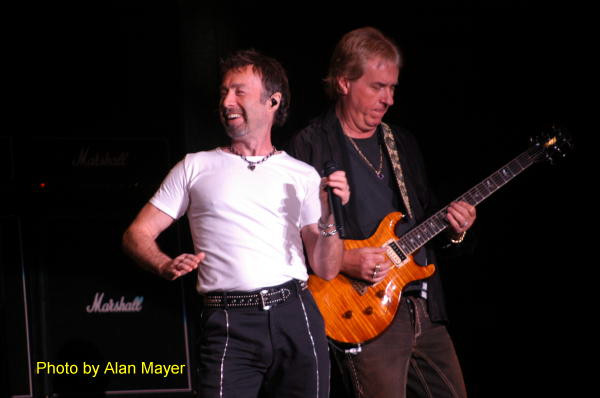 Tim with Paul Rodgers and the band 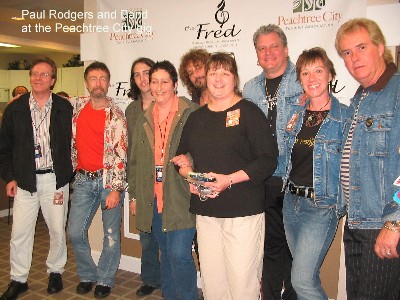 WE HAD A GREAT TIME IN ATLANTA MEETING NEW PEOPLE. THE PARTY AT THE HAMPTONS, WITH SO MANY COOL PRIZES!  SEEING THE PAUL RODGERS SHOW,  2 NIGHTS IN A ROW!
I want to THANK YOU SO MUCH for all that you do, I can only imagine the time and effort  that you put forth for ARN  plus countless other bands.
I WANT TO THANK YOU FOR  MEMORIES THAT WERE MADE ON APRIL 14TH '07'  I  HOLD DEEP IN MY MIND AND HEART FOR THAT IS THE NIGHT THAT A LONG TIME DREAM HAS COME TRUE,  WITH YOUR HELP IN THE MEET AND GREET.
WE ARE ALWAYS  LOOKING FORWARD TO ANOTHER PAUL RODGERS SHOW!
GOD BLESS
Kim & Jim Gold

Jim & Kim from Florida with Enino and Sylvana from Canada 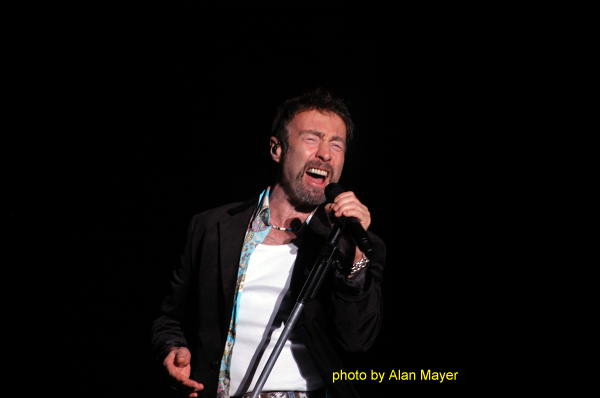 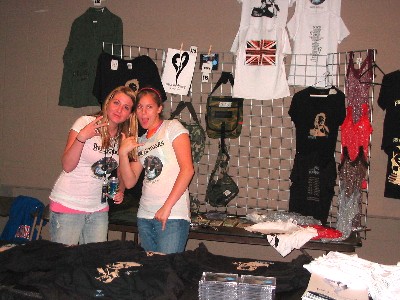 Attending the ALL STAR BAND in Atlanta